Four months ago, the CARES Act took unprecedented steps to deal with the impact of the Coronavirus. As July comes to an end, so do a large number of the measures Congress put in place. The question we now face is, “What next?” If lawmakers fail to act quickly, they risk the possibility of the economy falling back into recession. But with the amount of government intervention that is being discussed, should investors prepare for the possibility of inflation?

By mid-June, many of the businesses had exhausted their PPP funds. As we enter the month of August, Goldman Sachs puts the number at about 84%.

At the onset of the program, it was known that PPP loans were forgivable. The requirement was that businesses retain staff for eight weeks. But here is the big unknown. With many businesses already meeting the eight-week employment requirement for loan forgiveness and with the U.S. experiencing a resurgence in COVID-19 cases, will businesses once again begin to lay off employees? 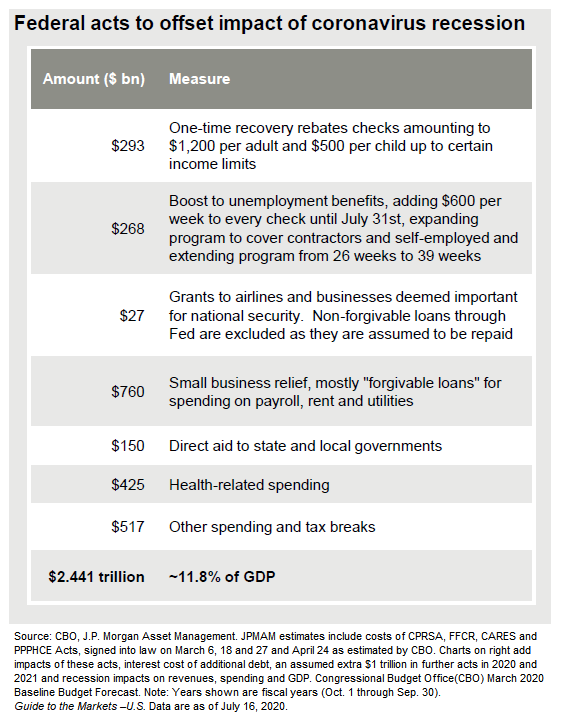 There is already talk about what the next round of PPP loans would entail. One of the proposals put forth by Republican legislators includes several qualifiers. The second round of PPP loans would be for businesses with less than 300 employees. In addition, only those businesses with revenues drops of 50% would be eligible to receive additional funds.

Under the CARES Act, unemployed workers receive an additional federal supplement of $600 per week. This was in addition to their state unemployment benefits. A single individual could expect to collect as much as an additional $2,400 per month through July 31st. According to the National Bureau of Economic Research (NBER), 2/3 of laid-off workers received higher benefits than when they were working. This inconsistency led to issues for employers attempting to re-hire employees to qualify for PPP loan forgiveness.

The hope was that this benefit would help people stay on their feet until the impact of COVID-19 had passed. In theory, the additional funds would keep people from defaulting on their mortgages/rents. And it would encourage them to continue spending in the broader economy, allowing for the possibility of a V-shaped recovery.

Here is something that not everyone realized. All states have benefit weeks that end on Saturday or Sunday. But because July 31st falls on a Friday, July 25th or 26th is the last day that anyone will receive a check, which may come as a shock to many individuals.

In one of the most recent Republican proposals, the Federal unemployment benefit would be for $200 per week through September. Starting in October, the benefit would then be a 70% wage replacement. Initially, the CARES Act aimed to achieve a 100% wage replacement. But because of outdated state unemployment systems, that was scrapped. Instead Congress opted for a flat amount of $600 per week. There is still some uncertainty as to how the Republican proposal would be carried out. One thing is for sure; the current Republican plan is substantially less than the current benefit. Which will be a reason for the legislation to be held up in Congress. 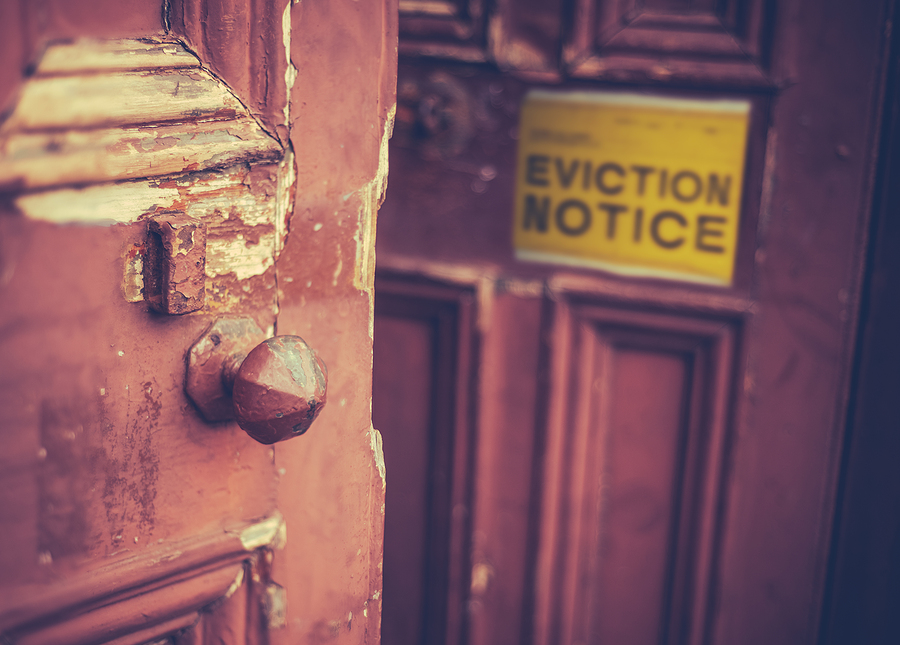 The CARES Act dealt directly with the issue of housing. As we discussed in Is Now a Good Time to Refinance Your Mortgage?,  the CARES Act provided homeowners with mortgage payment forbearance. But it also impacted landlords with homes backed by mortgages held by Fannie Mae or Freddie Mac. The CARES Act prohibited landlords who owned these “covered dwellings” from initiating eviction proceedings for non-payment of rent. Roughly about 28% of the nation’s 43 million renters live in these “covered dwellings.” This legislation will expire on July 24th. In reviewing various Republican proposals, there was no mention of extending the federal eviction moratorium.

As we discussed in prior market updates, the market is/was anticipating a V-shaped recovery. There are several possible catalysts to the recent run-up. As you can see from the chart on the last page, the CARES Act injected about $2.441 trillion into the U.S. economy. This figure does not take into account the support the Federal Reserve provided markets over the past several months. In addition to financial support, economic numbers have been improving as of late. But could there be other factors at work?

There is no debate regarding the performance of the broad market over the last several months. It has been breathtaking. Earlier in the year, we pointed out that stock indexes were beginning to become more concentrated in a handful of companies. They included Facebook, Apple, Microsoft, Amazon, and Google. Since that time, the trend has only accelerated. 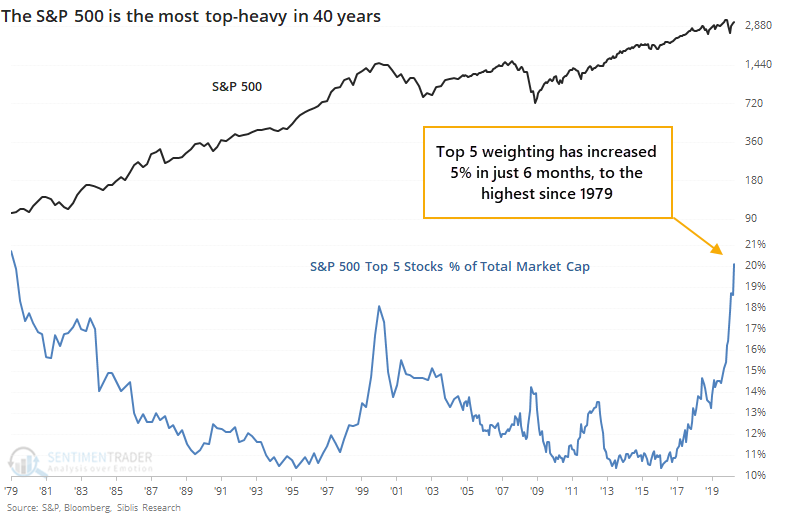 The S&P 500 is now the most top-heavy in 40 years. The weighting of the top 5 increasing by 5% in just six months. When indexes become this concentrated, it can hide underlying problems. The largest positions can move the index, even if the smaller positions are experiencing losses. Said another way, the index can be positive even though a majority of the companies are underperforming. And that is what we are currently seeing. As of July 22nd, almost 50% of S&P 500 companies are underperforming the S&P 500 index by more than 10%.

The heavy concentration in a small number of stocks can be problematic. What happens to the market as a whole if one or more of those companies begins to falter? In the same way that those concentrations have a more significant impact on the index returns on the way up, they could have an ever-increasing effect on the way down.

March and April were historic in terms of economic carnage experienced. Much of the U.S. economy came to a full stop. Starting in May, we began to see the economy start the process of reopening. The financial press gave a significant amount of coverage to the economic gains made over the last couple of months. But when examining these statistics, it is vital to keep them in their proper context—remembering especially the law of small numbers. If you reduce any measure of economic activity to near zero, any rebound off of that lower level will look significant when expressed as a rate of change.

Here is an example. Let’s say you start with a dollar. If you invest it and lose 75% over a year, you have a quarter left. If, in the next year, you make a 100% return, you are still only left with half of what you started. Whenever you experience a significant initial drawdown, it always requires a more substantial gain to get back to break-even. This is the challenge the economy is currently facing.

Both the positive market performance and economic news have served to restore investor confidence. When investors are more confident, they tend to take on more risk. In fact, Dumb Money Confidence has spiked to above 80%–the first time since January. Meanwhile, Smart Money Confidence is at its lowest level since early February. But as we learned back in November of last year, the Smart Money can be off on its timing. 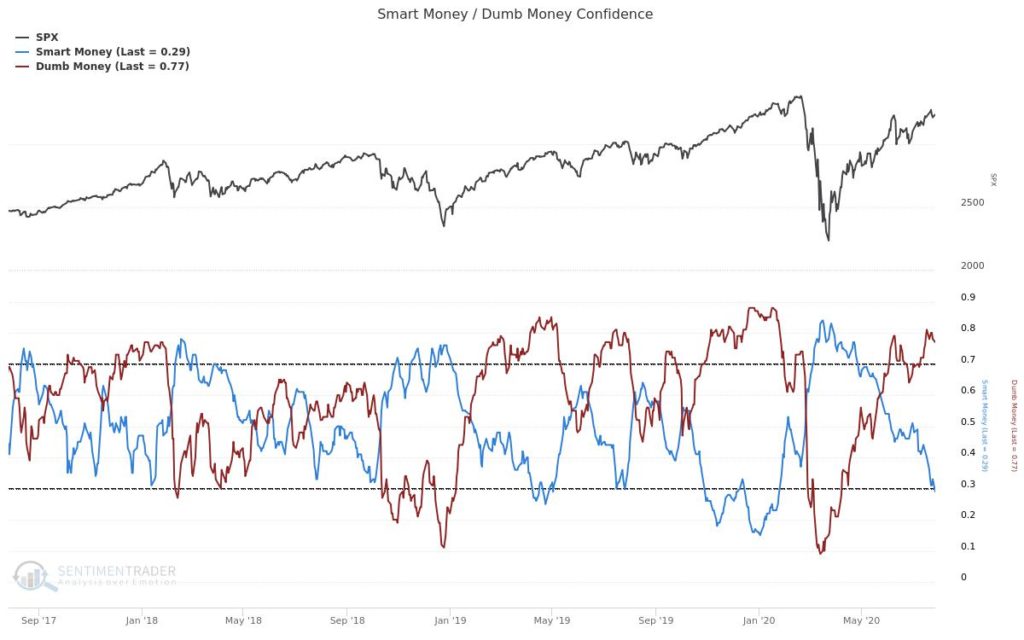 Given the steps already taken and the ongoing challenges faced by the U.S. economy, there are a few issues that have the attention of investors. For the time being, we are going to ignore the potential second Cold War brewing with China and the Presidential election later this year.

Which Letter is It?

It still isn’t settled. Up to this point, the assumption is that the government will do anything and everything to keep the economy upright. And this has driven the V-shaped market recovery.

If the government does not provide additional financial support, we run the genuine risk of a more significant W-shaped recovery.

Currently, Congress is debating an additional $1 trillion relief package as a follow-up to the CARES Act. Notice that I did not use the word stimulus. This legislation would once only be to stop things from getting worse. If there is a delay, we run the risk of economic conditions deteriorating further. It is doubtful that many politicians will want to see that going into November’s elections. And don’t be surprised if/when you start to hear about an additional relief packages to follow this one.

This Time is Different?

Since the start of the year, the Federal Reserve has added almost $3 trillion to its balance sheet. It is widely anticipated that amount will increase from $7 trillion to $8 trillion by the end of the year (see the chart below). It not hard to understand why many people think that this will lead to inflation.

In 2009, there were also concerns that the U.S. “firing up the printing presses” would cause inflation. With the most recent monetary response being five times the amount issued during the Great Financial Crisis, those fears are returning. But back in 2009, we never experienced inflation. Instead of devaluing the currency, we saw the value of the dollar strengthen. Will it be different this time? After reaching a high in late March, the U.S. dollar has decreased in value by almost 8%. Will this trend continue? 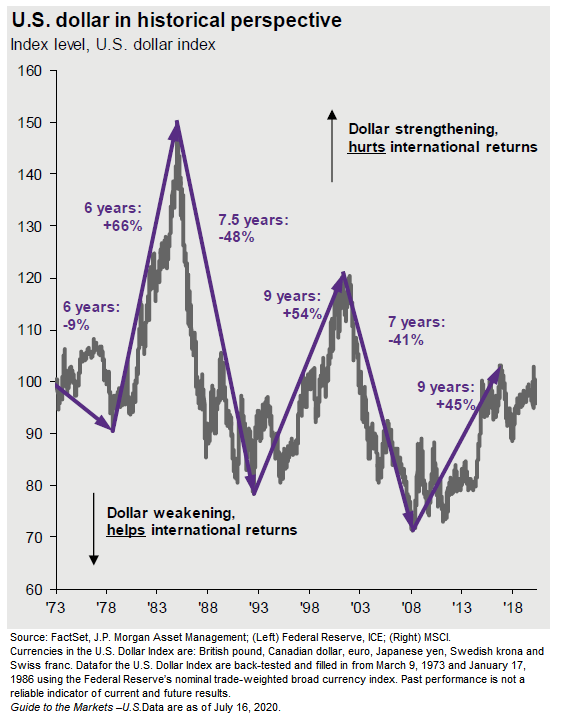 If the trend of dollar weakness continues, it will cause problems for those holding dollars. When a currency loses value, it typically makes products produced at home more attractive because they are relatively cheaper than imports. But what if you have a country that is dependent on imports?

Inflation usually is a result of economic growth. Often, there is either too much demand or not enough supply. But occasionally, we will experience inflation without economic growth or stagflation. The last time it happened was the mid-1970s. Is the market anticipating a period of stagflation? Perhaps. It might explain why assets such as Treasury Protected Securities and precious metals have experienced a recent run-up in price.

We are now entering the phase of the recovery where the market must prove that performance over the last four months was justified. Was the move based more on the possibility of a V-shaped recovery or the promise that the government would add additional stimulus when needed? With an election only three months away, we will probably find out sooner rather than later. Until we have this issue resolved and are past the election in November, expect markets to remain volatile.

Click here to learn more about how Hedgefield Wealth Management can help to remove the burden of managing your wealth.

Hedgefield Wealth Management is a registered investment adviser.  Hedgefield Wealth Management does not offer legal or tax advice. Please consult the appropriate professional regarding your individual circumstance. Information presented is for educational purposes only and does not intend to make an offer or solicitation for the sale or purchase of any specific securities, investments, or investment strategies.  Investments involve risk and, unless otherwise stated, are not guaranteed.  Be sure to first consult with a qualified financial adviser and/or tax professional before implementing any strategy discussed herein. Past performance is not indicative of future performance.

Kyle is a CERTIFIED FINANCIAL PLANNER Professional and financial advisor at Hedgefield Wealth Management based in Denton, TX, and works to be an agent of change in the lives of women and the community as a whole.
More by Kyle Eaton

3 Ways Coronavirus Could Impact Your Portfolio